Christ Is the Head of the Church

“He is also head of the body, the church; and He is the beginning, the firstborn from the dead, so that He Himself will come to have first place in everything.” Col. 1:18

“And He put all things in subjection under His feet, and gave Him as head over all things to the church, which is His body, the fullness of Him who fills all in all.” Eph. 1:22-23

Gospel of Grace Fellowship is governed by a board of elders and qualified according to 1 Tim. 3:1-7, Titus 1:5-9, and Acts 20:17-35. The primary responsibility of elders is the spiritual oversight of the Lord’s church. The office of elder is interchangeable with pastor according to Scripture.

Eric is the founding pastor of Gospel of Grace Fellowship in Edina, Minnesota. A former airline pilot and flight instructor, his zeal for sharing the Word of God led him to complete a B.S. in Theology as well as a M.A. in Theological Studies from the University of Northwestern in Roseville, Minnesota.

Eric’s knowledge of Hebrew and Greek, as well as his study of the historical background and context helps to provide a rich understanding of Scripture. Our church is blessed to be inspired, encouraged and challenged by Eric’s teaching each week. He has also written and taught on various topics in the fields of theology and apologetics.

Eric and his wife Deborah have one son. He enjoys fishing and continues to fly when he has time.

Steve came from a rich Christian heritage. His grandfather traveled as a pastor and evangelist in the United States and several foreign countries. Steve's parents also were (and still are) strong Christians and would frequently have evangelists and pastors stay in their home. When Steve was seven, influenced by the testimony of these visiting missionaries, he realized that he needed to make a personal commitment to Christ on his own.

Steve has been involved in music ministry most of his life. He has traveled extensively on gospel teams doing both group singing and solo work. It was on one of these music teams that Steve met Cindy, his wife of 38 years. They home-schooled two sons who are now successful adults. Steve does residential and some commercial painting for tent-making.

As he sought the most accurate interpretation of the Scriptures, God brought answers to his passion for the Word through many individual sources and eventually brought him to Gospel of Grace Fellowship. Steve has been a confirmed Elder at Gospel Of Grace Fellowship since February 2015. He is passionate about serving Christ in what he has been called to do. 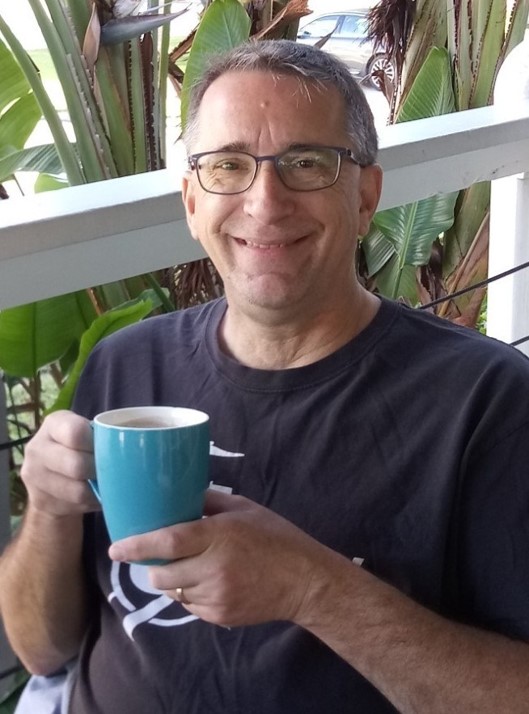 Steve was raised as a Catholic and became a believer in the Lord Jesus Christ as an adult. A hunger for the Lord and His Word was awakened in him through the study of the Scriptures. He attended Village Schools of the Bible, where he studied the Scriptures from cover-to-cover. He is a three-time graduate of that program, having taken the course with each member of his immediate family.

Steve, his wife Barb, and his two daughters (now grown) attended Gospel of Grace Fellowship since its earliest days and have served in various ministries. They were drawn to GGF by the expository Bible teaching and the church’s passion for the Gospel, boldly and carefully proclaimed. Steve is honored to serve as an elder to this congregation that has taught, loved, and encouraged his family.

Steve worked as a surgical video specialist at a local hospital for over 30 years. He is a music and audio lover; he loves to travel and camp with his family; and he enjoys cooking. He recently experienced the tremendous joy of becoming a grandpa!

Steve hosts a podcast called “"A Different Drummer" which looks into the promises of God found in Scripture.

Church membership is encouraged and may be pursued by any believer in Christ who attends regularly. A membership application is available at the Information table on Sunday mornings or by contacting the church office.

Our church bylaws direct the manner in which our church is operated and governed. To download a copy of our bylaws, click here.